In total, three bi-communal co-laboratories took place in July 2007. For the second one, The Economic Integration co-laboratory - Current Situation explored the obstacles of the current situation and defined the exact nature of the problem, i.e. the problématique. The triggering question that was tackled in this co-laboratory was:

Experts participating in this co-laboratory were asked to explore the obstacles of the current situation of Economic Integration. During the second three hour workshop session that took part in Saray Hotel, the participants proposed and clarified responses to the following triggering question:

In response to the TQ, the participants, economics and business experts, came up with 62 obstacles or threats in achieving free movement of goods and services within Cyprus and the EU, which were categorized in 11 clusters.

The participants voted for the five obstacles of higher relative importance in the context of the triggering question. Following the voting process, 18 obstacles received two or more votes, but only 3 dominant statements, received 4 or more votes and those were:

Statement # 45: Lack of economic desperation thus lack of motivation on the GC side to handle the burden of the TC economy on the way to greater benefits of a solution in the future (5 Votes).

Statement # 31: The fact that the deep state of Turkey does not like the TC to economically integrate with the GC community and with the EU, they want TCs to be solely dependent on Turkey (4 Votes).

The voting results were used to select obstacles for the subsequent structuring phase to identify inter-relations among the generated factors. Participants choose 16 obstacles, which were then structured within six levels and are related according to the influence they exert on each other. Those ideas that appear lower in the Root Cause Map, hence are positioned at the root of the tree, i.e. Level VI, are more influential in terms of influence than those at higher levels and are the ones to tackle preferentially.More specifically,

located at Level VI in the Map, influences most of the other obstacles appearing on the Map and is therefore a root factor of the overall Economic Integration – Current Situation Root Cause Map (see below). 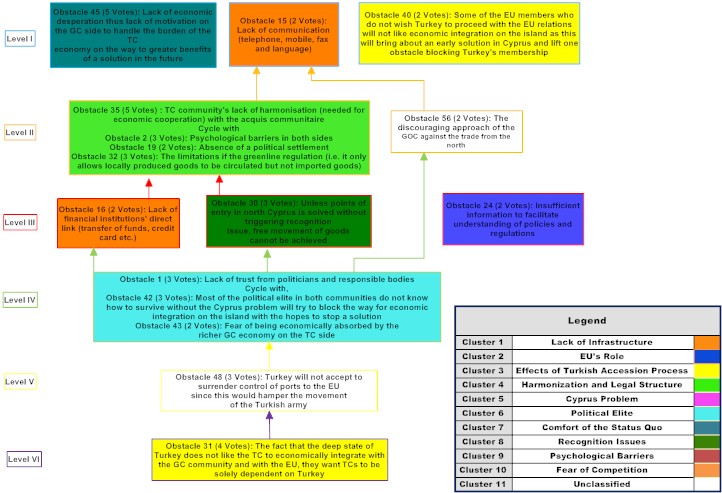 Interpretation of the Results

At the end of the voting, it was shown that 31 obstacles received one or more votes. Once again, the degree of disagreement – as 31 obstacles or perceived threats out of 62 received at least one vote - indicates the complexity of the situation.

One can easily see with regards to the obstacles and perceived threats that the level of agreement very similar to the agreement level in the idealization session. Once a common vision is designed, it is easier to draw an action plan aimed at solving identified problems or threats. Thus, one should not assume that lack of agreement is a failure in the dialogue or understanding. Rather, it underlines the complexity of the problem.

Such cycles are indicators of the complexity of the situation being addressed and usually require special treatment during the design of an action plan for attaining the ideal image of economic integration and free movement of goods and services within Cyprus and the EU.

The obstacle that emerged as the root cause of the current situation in Cyprus regarding economic integration and free movement of goods in services is: Obstacle #31: The fact that the deep state of Turkey does not like the TC to economically integrate with the GC community and with the EU, they want TCs to be solely dependent on Turkey.

The author of the idea clarified this statement as: “The deep state of Turkey does not want to solve the Cyprus problem. They want to keep integration as a trump card. I remember the chamber of commerce experience, when the EU was trying to do something, like electricity, they would say we would do it for you as part of politicizing”.

Another interesting observation is that two factors (obstacle #46 and 40) on Level I are not related to any other factor structured in the map.

The workshop will be conducted through the methodology of "Structured Dialogic Design Process" (Structured Dialogic Design Process, SDDP) known as Structured Democratic Dialogue. The SDDP allows the team involved to discuss an issue with a structured and democratic way that allows us to achieve practical results. It is a deeply reasoned, scientific, psycho-social methodology has evolved over the past 30 years in its current form. Helps build consensus and solve complex problems.

The SDDP workshops achieve these results through respecting the autonomy of all participants and the use of a toolkit consensus including discipline, technology, and graphics ideas that allow participants to control the discussion. The SDDP methodology developed to help understand and solve complex social systems (complex societal systems). It has been adopted successfully around the world in situations of uncertainty and conflict. At European level, the method has been used by four European networks of experts with participation of about 20 countries each time.