CYBER KIDS was a nation-wide social entrepreneurial experiment launched in 1992 in Cyprus by Yiannis Laouris, George Vakanas and Maria Symeonides. The Research and Development of its award winning curriculum was done by the Cyprus Neuroscience and Technology Institute. Within the first five years (1992-1997) 26 computer- learning centers were launched with average of 50-150 students enrolled every year in each location. By 1999, the number of children who benefited from the Cyber Kids curriculum in the 36 Branches exceeded 15,000, which is approximately equal to 20% of the country’s youth population (ages 6-15). CYBER KIDS has also contributed against brain drain by employing a total of 186 young scientists between 1991-1999. More importantly, MISnTED Ltd., the owner company had a policy of employing teachers from the public educational system as part-timers as a means of contributing to a large-scale reform from within the system.

CYBER KIDS was based on a concept coined by its creators then called the "profitable dream":

The project was founded on a well-defined vision statement:

CYBER KIDS was an internationally registered trademark of the mother company, MISnTED: Management Information Systems & Technology Development. The three founding members, Yiannis Laouris, George Vakanas and [[Maria Symeonides] donated 30% of their total shares to the Cyprus Neuroscience and Technology Institute in order to fund its socially responsible research operations. In addition, MISnTED: Management Information Systems & Technology Development provided yearly grants to Cyprus Neuroscience and Technology Institute for research. The project was originally funded by the partners' and by a CY £44,000 government loan. All key people were invited to join as partners: Dinos Georgiades, Evros Alexandrou, Harry Anastasiou, and all employees were given shares totalling to £250,000 of value. In 1996, the Cyprus Development Bank became a partner with 10% in the Cyprus (mother) company and 30% in the Greek subsidiary, investing £100,000 and £300,000 respectively. It was under the leadership of the Cyprus Development Bank, that in 2000 CYBER KIDS merged with 11 other companies to form a public, high-tech company known as CYBER GROUP. Unfortunately, the crash of the stock markets in combination with a number of unconstitutional laws passed repetitively by the Cyprus Parliament allegedly to "protect" the rights of investors, forced CYBER KIDS to bankruptcy along with more than 100 other entrepreneurial companies.

The Multimedia Factory in the Media

The award-winning curriculum of CYBER KIDS was characterised by a number of innovations: 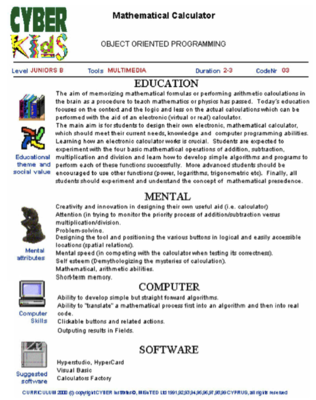 Example of a simple lesson plan 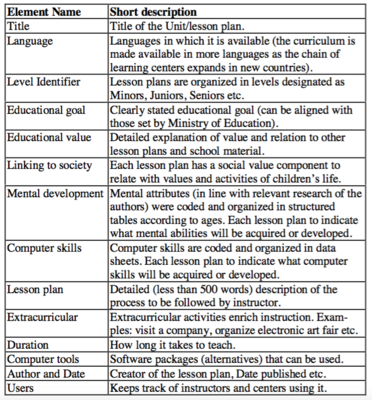 The structure of a KnowledgePacket

A KnowledgePacket® is composed of: