Part of Getting the Best out of our Insafe Network 2007 Co-Laboratories.

For the first time ever, all Awareness Nodes of the EU Safer Internet project used the Structured Design Dialogue Process (SDDP) during their Insafe Training meeting which took place in Limassol, Cyprus September 17-19, 2007. The two SDDP co-laboratories ‘Engaging Educators’ documented here built on experiences gained from previous relevant training sessions in Bruges and Stockholm as well as the results of the 6-month evaluations (Customer Satisfaction Surveys) performed by the coordinating node. Two simultaneous running co-laboratories were dealing with the topic of engaging educators. Co-laboratory A explored the weaknesses of the current model of collaboration between nodes and educators, while co-laboratory B envisioned not only ideal means of engaging educators in the Internet Awareness Campaign but also envisioned the ideal collaboration model between nodes and educators.


Participants of co-laboratory B were asked to visualize the ideal scenario of a well-functioning and efficient collaboration model between nodes and educators. They were tackling the following triggering question:


What are descriptors of an ideal collaboration model between Nodes and educators? 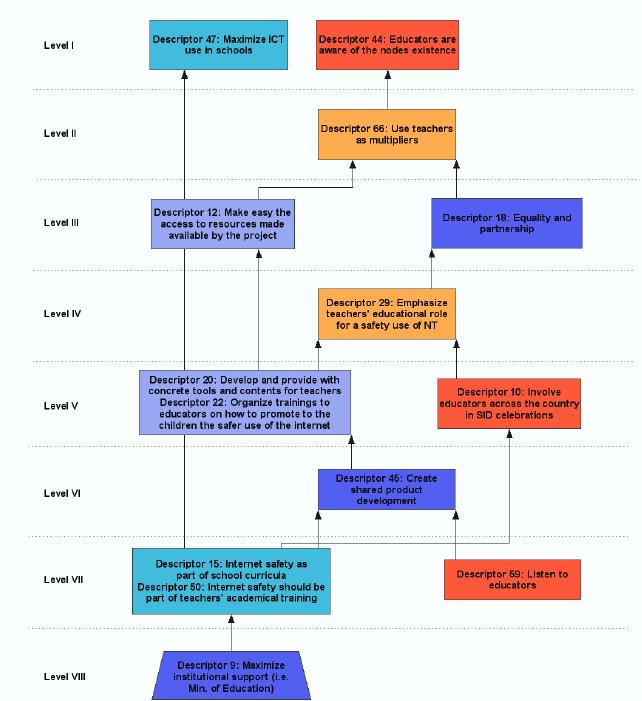 Each participant chose five ideas that they thought were the most important. The voting results were used to select ideas for the subsequent structuring phase to identify inter-relations among the generated ideas. The 14 ideas were structured within four levels and are related according to the influence they exert on each other. Those ideas that appear lower in the Influence Map, are more influential in terms of influence than those at higher levels and are the ones to tackle preferentially.

According to the participants of this workshop, the obstacle appear to be the most influential was:

After having participated in the structured dialogue it was expected that: