The report documents the results of an SDDP workshop organized by Future Worlds Center 08 - 11 July 2010 in an attemp to create a vision map for the development of goals and structure of MDG materials to be produced. The SDDP co-Laboratory was organized using the structured dialogic design process (SDDP) approach within the context of a rich web-based communication environment. The workshop was facilitated by Yiannis Laouris and Mrs. Mary Ioannou and it was attended by 33 participants from 6 countries.

During the first session of the co-laboratory, the participants engaged in a structured dialogue focusing on the following triggering question:

What goals should MDG resources satisfy to meet the requirements of TeachMDGs project?

The goals were clarified in the plenary session, thus enabling participants o achieve a better understanding of the views of other members of the Consortium as well as to greatly expand their own horizon regarding the breadth and depth of issues which need to be taken into account.

In response to the TQ, the 33 participants came up with 65 characteristics, which were categorized in the following clusters:

The descriptors were clustered in an interactive manner, thus providing opportunities for further and deeper clarifications of salient distinctions between separate ideas.

After having generated, clarified, and clustered the obstacles, each participant chose five factors that they thought were the most important. The voting results were used to select factors for the subsequent structuring phase to identify inter-relations among the generated factors. The votes were widely spread among most of the descriptors.

Following the voting process, 46 ideas received one or more votes and were structured to create the influence MAP shown below. 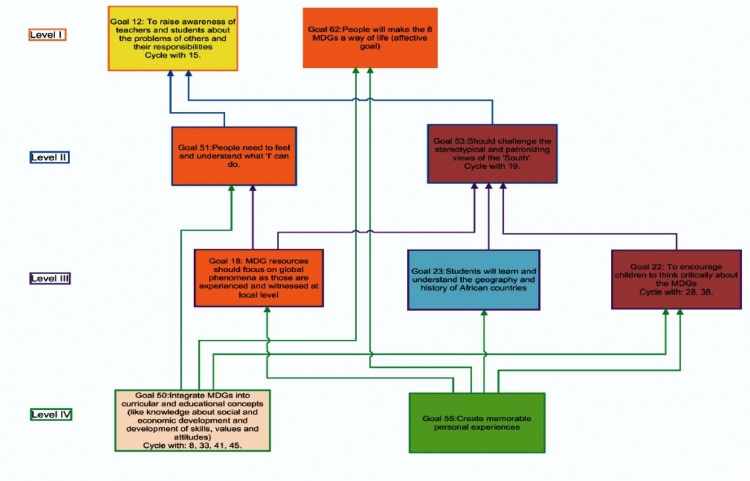 Influence tree from the SDDP Internal Workshop to develop a Common Framework for MDG.

According to the participants of this workshop, the descriptors which appear to be the most influential were:

The highly complex ‘influence map’ consists of four different levels of influence. Descriptors at the bottom are considered to be the most influential. Making progress or achieving results in the bottom descriptors makes it a lot easier to address those that lie higher in the map. In summary, almost all participants approved that the following goals are the most influential and agreed that further actions must address these root causes satisfactorily.

The coordinating organization of this project is the Future Worlds Center (Cyprus Neuroscience and Technology Institute). The project’s partner organizations are:

The associates of the project team are: