“SafenetCY” is the Hotline that promotes the safe use of Internet in Cyprus. It serves the needs of all people that live on the island (i.e., also Turkish-Cypriots and other minorities) and addresses not only issues of pornography, but also racism (currently on the rise in Cyprus), gender discrimination and inappropriate use of peoples’ images.

SafenetCY is the Cyberethics Safer Internet Hotline through which illegal or disturbing content can be reported. The hotline operates island-wide (serving also Turkish-Cypriots and other minorities) and focuses on reports of child sexual abuse images and racism/xenophobia. The project engages actors from the government and civil society, therefore contributing towards the eradication of cyber crime in more than one sector. The hotline offers the opportunity to all people to report through the various different reporting methods that it entails (i.e. telephone, email and website).

What are the specific Objectives for the Hotline?

The person who wants to report illegal content on the Internet that s/he came across may choose one of the following ways to submit a report. Online reports are preferable since they are accepted automatically. A guidelines section is given in the SafenetCY website in order to provide a complete set of information, about the reporting procedure.

In order to make the processing of any report as effective as possible the Hotline requires to be provided with specific information on the location and type of illegal content that the person who wants to make the report encountered.

For each different type of report it is required to provide SafenetCY Hotline with the corresponding information:

Persons filling reports have the option to choose to remain anonymous by not providing any contact information. Making an online report does not automatically imply that they lose their anonymity. The Hotline registers only information that the person making the report enters to the Hotline’s online form. The Hotline does not register any other information, not even the IP address of the machine used to submit the report.

In the case where the person making the report wishes to be notified about the outcome of their report, they should provide sufficient contact information. The minimal information includes: First Name, last Name, and email. 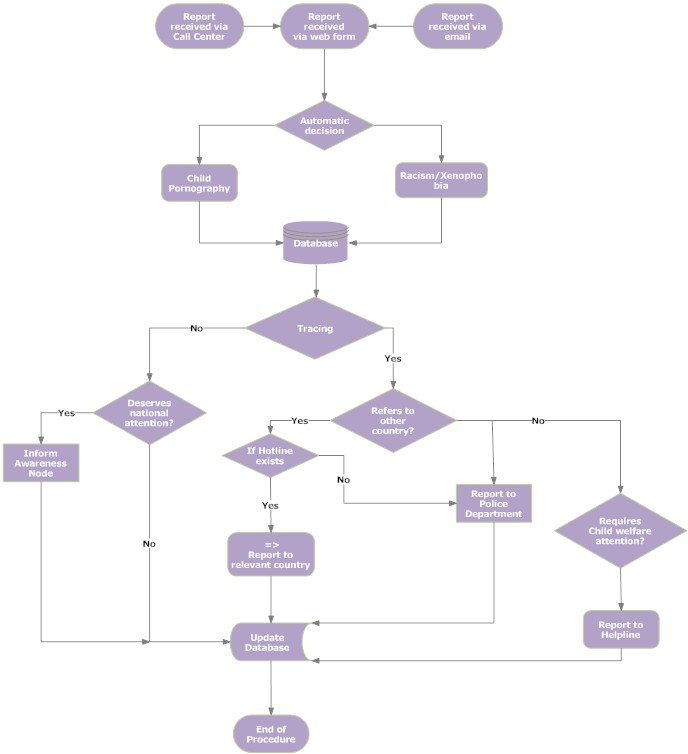 Receiving a report: The person that wants make a report of an illegal content has to fill the relevant form depending on the source that contains the illegal content.

If the source is a website (URL) then in the relevant form must be reported:

If the source is a newsgroup then in the relevant form must be reported:

If the source refers at a P2P then in the relevant form must be reported:

Indoor investigation and Procedures made by SafenetCY:

Every report is recorded at SafenetCY’s Database. From that point every procedure has to be processed no later than 24 hours from the time the report was made. The following steps are made by SafenetCY:

1. Verification: Due to changes in our rules and regulations, the hotline no longer accesses the content that is reported. Instead, it follows directly to tracing the content.

2. Tracing the source: An attempt is made, using technical means, to trace the country where the reported content originates.

3. Cyprus Police notification: SafenetCY forwards reports that are hosted in Cyprus to the Cyprus Police, irrespective of their legal or illegal status.

4. Reports forwarded to Helpline: If the reporting source originates in Cyprus and the form of the report could hurt an involved child then the helpline will take the appropriate actions to support the child.

5. Foreign hotline notification: If the reported content originates from abroad, the report is forwarded to a hotline in the country of origin (if one exists) through the IHRMS (URL database) system established by INHOPE.

6. Feedback: If the user that made the report wishes feedback for the outcome of his/her report, then SafenetCY informs him/her of the actions taken based on his/her report.

7. Database update: SafenetCY informs its database for the outcomes of the illegal report as received by the Local Authorities.

8. Inform Safer Internet Center: If the content does not have to do with anything illegal, but still needs national attention the Awareness Node is informed about the possible threats.

Note that no information is given about the report, but only about the existence of the specific “threat” on the Internet.


Actions taken by the Cyprus Police:

The Cyprus Police Department runs a specific unit (Cyber Crime Unit) in order to deal with the situation of illegal content on the Internet. After SafenetCY notifies the Police about the report hosted in Cyprus, the Police will make the following steps:

1. Determine whether the content is illegal or not illegal.

2. If the content is illegal then the Cyprus Police makes any necessary actions to deal with the situation and informs the hotline of the outcomes.

3. If the content is not illegal then the Cyprus Police notifies the hotline mentioning what the content was referring to in order for the hotline to register it on its database and/or notify where necessary the Safer Internet Center.

The Republic of Cyprus has signed, ratified, acceded or succeeded and essentially incorporated into the Republic's municipal law all international treaties and conventions concerning child protection, elimination of racism, fortification and efficient application of Human Rights and Fundamental Freedoms in general. A list of all relevant international treaties and conventions is provided by the official website of the [Ministry of Foreign Affairs][1]. A comprehensive overview of the underlying local legislative framework as well as relevant to the functionality of the SafenetCY Hotline is outlined in this section.

Laws relevant to the Internet


In Chapter II: Section 2 is concerned with issues of Procedural law and Section 3 with Jurisdiction. Chapter I of the Convention provides the use of terms; "international co-operation" and "final provisions" are the subjects of Chapters III and IV respectively. The full text of the [Convention on Cybercrime][2] can be accessed through the website of the Official Journal of the European Union.

Definitions according to the Cyprus law
«...

Ο περί της Συμβάσεως περί των Δικαιωμάτων του Παιδιού (Κυρωτικός) Νόμος του 1990 (Αρ. 243 του 1990) – (UN) Convention on the Rights of the Child
The [Convention][3] has been signed and ratified by nearly all countries ― members of the UN organization (the USA and Somalia have signed but not yet ratified the Convention).

The full text of the Convention can be accessed through the websites of [UNICEF][9], the Office of the United Nations High Commissioner for Human Rights, and the English edition of the [Social Welfare Services of the Ministry of Labour and Social Insurance][10].

Article 34, listed below, is of particular importance:
«...
Article 34

States Parties undertake to protect the child from all forms of sexual exploitation and sexual abuse. For these purposes, States Parties shall in particular take all appropriate national, bilateral and multilateral measures to prevent:

1. Each Party shall adopt such legislative and other measures as may be necessary to establish as criminal offenses under its domestic law, when committed intentionally and without right, the following conduct:

2. For the purpose of paragraph 1 above, the term "child pornography" shall include pornographic material that visually depicts:

Other conventions:
[The Hague Convention on the Civil Aspects of International Child Abduction][11]
[The European Convention on Recognition and Enforcement of Decisions Concerning the Custody of Children ][12]

Issues concerning Internet Safety and Protection of Personal Data are addressed in Part 14 of the Law 112(I)/2004. Part 14 of the above mentioned law (Security, Secrecy and Data Protection) is essentially the incorporation of Directive 2002/58/EC of the European Parliament and of the Council of 12 July 2002 concerning the processing of personal data and the ?protection of privacy in the electronic communications sector into the Republic's municipal law. The [Directive 2002/58/EC][15] can be accessed through the Portal to the European Union Law.

In addition to Law 112(I)/2004, the Office of the Commissioner of Electronic Communications & Postal Regulations has published a number of regulations and decrees governing relevant issues.

Law 3(I)/2000 has been mentioned in the "Child Pornography" section. In respect to adults, the Law states the following:
(Article 3: Sexual exploitation)
The following are prohibited:
a) Profiteering by sexually exploiting adult persons in the cases that:

b) Profiteering by trafficking of adult persons for sexual exploitation, given that any of the conditions listed above holds true.

The following measures guarantee maximum security regarding the access to the office spaces in which investigations and reporting is made.

The database in which reports are stored is located physically on a separate server. The following measures guarantee the safety of this server and its data: