This SDD was implemented in the context of the MedBEESinessHubs project. The results presented here are from a virtual Structured Democratic Dialogues (SDDs) that was organized and managed from Cyprus between March and June 2022. The aim was to he participants from the five countries for a full-scale week-long training in SDD facilitation that took place in June 2022. The representatives from the participating countries were prepared on how to apply SDDs to address local challenges in their respective rural communities.

This first part of the SDD training took place between May and June 2022. It was organized as a sequence of 5 weekly Zoom meetings. The Triggering Question was: In the context of your work, what are obstacles that prevent efficient stakeholders’ dialogues?

The participants produced 35 ideas, which were clustered into 6 categories. 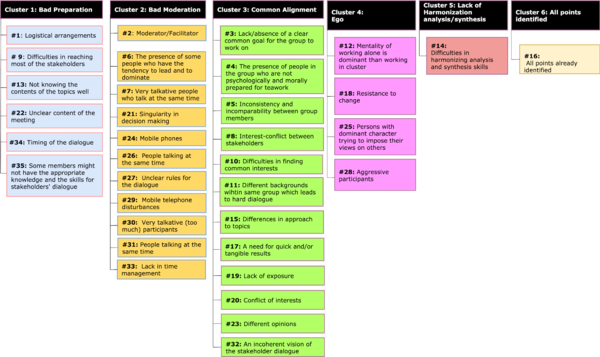 After voting for their top 5, 17 ideas received votes (indicating Spreathink = 40%), and 7 were structured. 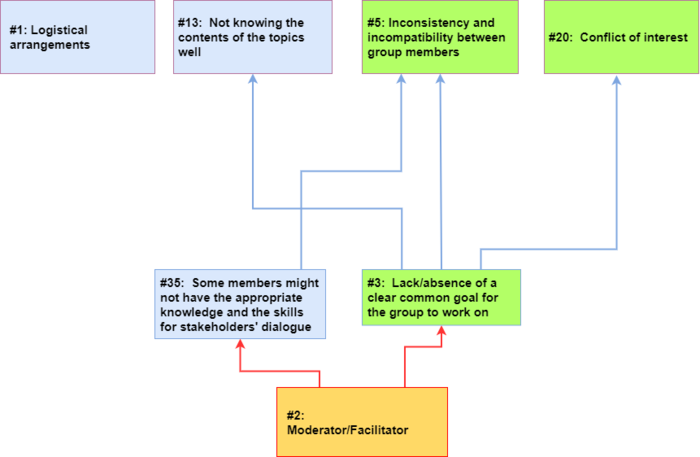 The following ideas made it to the root of the tree:
Idea 3: (9 Votes) Lack/absence of a clear common goal for the group to work on
Idea 2: (7 Votes) Moderator/facilitator
Idea 5: (4 Votes) Inconsistency and incompatibility between group members (age, educational level and experience, etc.)
Idea 20: (4 Votes) Conflict of interest
Idea 13: (3 Votes) Not knowing the contents of the topics well
Idea 35: (3 Votes) Some members might not have the appropriate knowledge and the skills for stakeholders’ dialogue
Idea 1: (1 Votes) Logistical arrangements


The striking finding is that the group identified #2: Moderator/facilitator, as the most influential factor.