An international panel of 15 experts in e-democracy supported by a team of 5 structured dialogue experts were engaged for 3 weeks in asynchronous and synchronous virtual interactions. Both the Participants and the Facilitators were spread across continents. The subject of inquiry was to identify key obstacles that could potentially prevent an ambitious vision for the newly elected Obama Administration from being implemented. The Planetary Dialogue SDDP on Obama's Vision co-laboratory used as Triggering Question:

In the context of Obama's vision for engaging stakeholders from all walks of life in a bottom-up democracy employing Internet technology, what factors do we anticipate, on the basis of our experiences with SDDP, will emerge as inhibitors to the actualization of his vision?

The picture below immortalized a moment during which the 3 Facilitators based in Cyprus received a "No" voting result. The Lead facilitator, Aleco Christakis asked the participants to decide whether one of the identified challenges was aggravating another. In such a dilemma, a "Yes" is taken only when more than 2/3 (or sometimes 3/4) of the participants vote for a "Yes". This was not the case here, as shown by the gesture of Yiannis Laouris, in the middle, who was in charge of entering the outcome of the voting in the Cogniscope Software. Elia Petridou, on the right, was in charge of transmitting her Cogniscope Software screen to all participants, while Maria Georgiou, on the left, was documenting the discussions and periodically updating, printing, and posting notes in front of the facilitators (shown on the window). Gayle Underwood, based in Michigan, was in charge of counting the votes and also holding private one-to-one communications with participants who were requesting support. 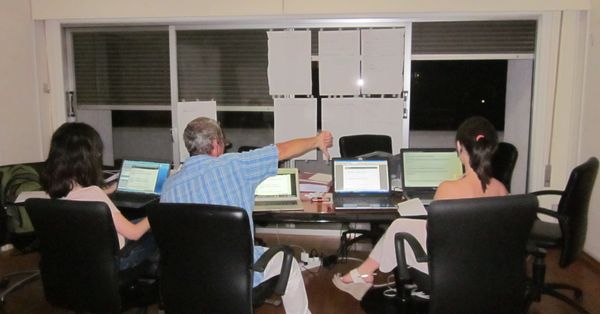